UFC 228 on paper carries more depth than next month’s likely highest grossest UFC pay-per-view card of the year. The event is not the only thing being overlooked, several fighters are being overlooked according to the betting odds, which could result in an upset or two.

Tyron Woodley and Darren Till both appeared horrible doing media rounds a day before official weigh ins. As Till inches closer to the unforgiving scale, his chances of successfully making championship weight appear better. The Liverpool native’s odds of defeating both the UFC scale and the UFC welterweight champion are currently in his favor as of today. 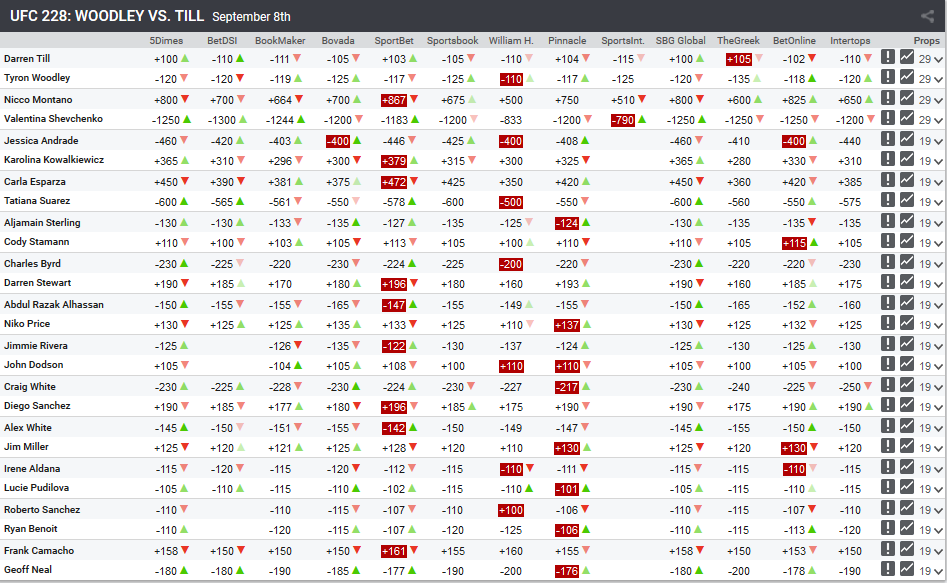 Woodley is a slight underdog, but despite all that he still enters the bout with more tools in his arsenal. He’s got the one punch knockout power, the high caliber wrestling and the experience of being under the bright lights on several occasions. He is not getting any younger, which probably means the weight cut is only getting harder with every fight, but he’s a master at playing it smart and sticking to his strengths while patiently awaiting the opening he needs to blitz on his opponents. He’s also rarely taken damage in his last four bouts.

Till has been open about the difficulty of the weight cut 12 lbs out and even told the media that he is not 100% entering the contest. While no fighter is ever really 100% it’s fair to question how strong his chin will be come fight night against a guy with Woodley’s power. It’s also fair to question Till’s endurance should Woodley attempt to take the fight to the ground.

The co-headline seems to be a foregone conclusion that Valentina Shevchenko will make quick work of Nicco Montano. While it’s a safe bet, it’s important to remind ourselves that Montano is coming from financial struggles and was even spotted using an EBT card on an episode of UFC Embedded. This girl has absolutely everything to gain in her title defense after a near year long layoff. She needs that win bonus for her sake and her cat’s sake.

Shevchenko on the other hand has fought a total of six UFC bouts and while her last win was an absolute mauling, four of those six fights have gone to a decision. Montano has at least a puncher’s chance and could always pull off a win if Shevchenko toe falls off as Montano gets beaten on.

Carla Esparza is being matched up against the undefeated Tatiana Suarez. Suarez’s last opponent was the former UFC hype job Alexa Grasso while Esparza’s last opponent was a multiple title contender. In fact, many thought Esparza won the fight against Claudia Gadelha.

Like Suarez, Esparza comes from a wrestling background, but she showed some power in her hands against Gadelha. She nearly dropped Gadelha in the first round and was able to secure top position at the end of the final round. Suarez is three fights deep in her UFC run and is now set to fight a former champion with a lot more cage experience. Esparza could be too much too soon for Suarez.

Niko Price is set to fight Abdul Razak Alhassan in the main card’s opening bout. Alhassan is the slight favorite heading in despite the fact that Niko Price finished Randy Brown off his back via hammer fists in July. Alhassan has two finishes in his last two bouts, but they were against the same guy. Alhassan has proven to be a brawler who takes as much damage as he can dish out and while he’s been successful at it, Price has a size and reach advantage. In six UFC bouts, Price is a proven finisher with two submission wins and three knockout wins, one being overturned due to some marijuana failed test.

John Dodson is entering his bout against Jimmie Rivera as the underdog. Rivera is coming off a head kick knockout loss three months ago while Dodson arguably has the fastest hands in the division. Dodson also has dynamite in his hands. His four UFC losses came by way of decisions, three of which could’ve gone his way.

Dodson’s biggest criticism is not doing enough to convince the judges he won the fight. He might not have that issue this time around given the fact that he wants nothing more than to put a beating on Rivera after feeling disrespected by him. Dodson is one of the happiest people on the planet and one of the most talented bantamweight fighters to boot. He is due for a finish and might be pissed off enough to get it.